The story you are going to read that follows this introduction is from a Mum here in Whangarei who asked me to take a look at her daughter. As Leanne was in hospital in Auckland I energetically went into her energy field and had a look. What I picked up is what her mother explains in her story which is all truth.
This is not the first case I have personally dealt with in this way but it is the one that has had the medical back up and the results that were undeniably what they were. There are photos and once I get them they will go up on my website with the testimonial. This is not an unusual case and I know to some reading this you will think it to be, but in this that I do, I have come across many who were experiencing this type of invasion of  body. The experiences of course can affect them and their bodies in different ways. One way is that some have had swollen hands, feet or legs and sometimes the neck and face. They are water filled, so they are as if retaining water and the skin in those areas will peel off or scale.

While Leanne was going through her experience, they spoke with nurses at the hospital who explained that there are many cases the same or simular to Leanne, in that they are experiencing high levels of pain and they can not find out what is causing this pain and have had to send them home to deal with it basically. I felt that if this was the case then we were required to put the word out and to bring an alternative answer. So this is why we are entering this testimonial in to the newsletter and on the webste in the hope of it reaching those that need some assistance.

An Experience In My Life.

My daughter Leanne was in hospital going into her 6th week and the Doctors and Specialist from all the Departments could not find any reason for the chronic pain she had had all those weeks.  Her pain score was anywhere between a 7 & 9 and she would often rock herself to ease the pain. In the first 2 weeks her stomach started to get larger as if she was 3 months pregnant and she was producing milk.  By the time she had been in hospital 4 weeks her stomach had increased even more and this was even more of a mystery as Leanne had had a hysterectomy 5 years earlier, so what was going on?
After an MRI scan, CT scans, X-rays, a colonoscopy and multiple blood tests there were still no answers.
She was on a rather large cocktail of drugs and to me should have been swinging from the light bulbs but these only minimized the pain for her for a short length of time.  Every hour she was having some form of pain relief and this was becoming beyond a joke.  She had Doctors telling her that her chronic pain was not a priority and that hundreds of people go home and live with chronic pain and swollen stomachs.  To us this was unacceptable but what was the next step?

I decided I had to spend some time with my daughter but before I left I went to see Mandy who I knew through our Spiritual Meetings every month and also knew she was a healer which is only one of many things she does, as I was really getting worried about her and there had to be an answer somewhere.  Mandy could see something and even mentioned it could even be an ET (Extra Terrestrial) but at that time Leanne still had to have a colonoscopy and she wanted to wait for the results.  I was to stay in touch with her and tell her how Leanne was progressing, which I did.

The last straw was when I saw Leanne.  What a shock to see my daughter looking like an old bent over lady with so much pain.  The only way she could sleep was to sit up and she looked so uncomfortable.  Laying flat was painful and felt like everything was pulling.  She would talk and twitch aggressively in her sleep waking herself up only for a moment then dose off again, but on waking would be in so much pain and not in the best of moods meaning not very nice to deal with which was understandable.

The night before I left I was walking down the corridor with her and she started to have contractions.  The nights were always bad but this had to be one of the worst and how could this be after having a hysterectomy?  These were coming every 3–4 minutes and lasting 40-50.  She looked at me and said “What is wrong with me I must be going nuts”.  As a Mother what could I say and what answer did I have for her.  All I could do was tell her she wasn’t going nuts and that things would be alright.  How, I didn’t know.

The House Doctor was called and felt the contractions as did the main nurse on night duty but Leanne was told there was nothing the Doctor could give her for the pain.  These lasted all night and she was now not only in pain but worn out and hadn’t had a proper sleep for weeks.  What was the answer?  What could I do to help my daughter?

That afternoon I had to come home as I had to get back to work the following day.  On arriving home I decided to ring Leanne to see how she was doing as she had had contractions all day but not as frequent.  She was so upset as the contractions had started again and they were coming harder and faster. That was it, I had to do something and I decided to ring Mandy.

Mandy tried to get into Leanne but had trouble and asked me when I was going to see her next as she felt she had to put her hands in her feild. I then arrange to go back to the Hospital with Mandy the next day as my daughter was more important than work.

On arrival Leanne was sitting up and sleeping.  She had had another rough night so they had let her sleep.  Big mistake as she was firing on all cylinders when she woke up.  Mandy knew straight away that she had an ET with her.  She told us when she went into Leanne earlier from home she could see her sitting the way she was when sleeping, legs crossed and head hanging down.  Mandy asked me if I could see a change in Leanne’s face.  I told her it was funny she asked that because when I first saw Leanne a week ago I was sitting to the side of her and it looked like her eyes were bulging and I thought, no, it is because she is so tired and not well.  Mandy confirmed that yes I was right.  She mentioned to Leanne that it didn’t matter how much pain relief or what pain relief they gave her it wasn’t going to take the pain away as she could see a reptilian tail wrapped around her spine.  After talking to Leanne, Mandy started the process of extracting this ET.  It was amazing to watch.  Leanne had to lie down as best she could and Mandy started scanning her stomach with her hand.  She had no control of her hand and it was going backwards and forwards.  I could see that Mandy was working hard as her own body was fighting to extract this thing from Leanne.  After scanning her stomach she asked Leanne to sit up and she worked on her back.  At one stage Leanne yelp “Ow” and after the scanning I asked Leanne what was that for, she said it was like a knife had slashed her on the inside on her side but the pain in her back had disappeared.  Mandy said straight away “thanks for that that has just confirmed to me it is still there and it is trying to hide, I felt it shoot to the front as I put my hands in your feild, these things do that.”

We waited a few hours and Mandy scanned Leanne’s stomach again and this time she felt she had got it all.  Mandy told Leanne that it would take 4 days for the energy of the ET to leave her body.  The pain would go and her other symptoms should start to go also.  We had to keep Mandy informed as to any changes.

In those 4 days the only change Leanne had were her toes went numb.  Mandy could see that it was a fetus half out and it was putting pressure on her nerves just as a normal birth may do.  So hard to believe when you have nothing to show for it but something was happening and I knew this was going to fix my daughter.

When the 4 days were up Leanne still had pain and her heart rate had increased which told Mandy there was something still there.  It had to be the source from which the ET had come from.  I was determined that this thing had to leave my daughter and after work off Mandy & I went again.

This time Mandy seemed to do a more intense scan with her fingers.  I could just about see the red ray coming out of her figures.  I felt it was a real thorough scan and she extracted the umbilical cord this time.  After checking and rechecking Mandy was certain this time that it was gone and Leanne had to wait another 3 days for the energy to leave her body.

On our way home Mandy told me she felt Leanne had picked this ET up in the Solomon Island where she had been working but it had originated in China.

The Doctors have no explanation for what has happened to Leanne and they do not know that Mandy was involved.  They would probably think I was nuts but they know more than they let on.

Four days later my daughter was home with no pain, no milk and no swollen stomach.  So what is that telling us?

What can I say but “Mandy you did it!”  I don’t know what would have happened to Leanne if Mandy hadn’t helped her.  All I can do is say “Thank You” from the bottom of my heart and may you be blessed in every way.  I have been blessed with you being in my life’s journey.”

So people this is my adventure and I would say to everyone out there that if the Doctors can’t find a solution, call Mandy because Leanne’s case will not be an isolated one and yes, they are out there.

Mandy’s famous words are “Bring it on!!” 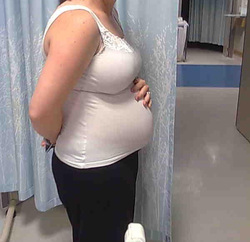 Remember this lady has no uterus.